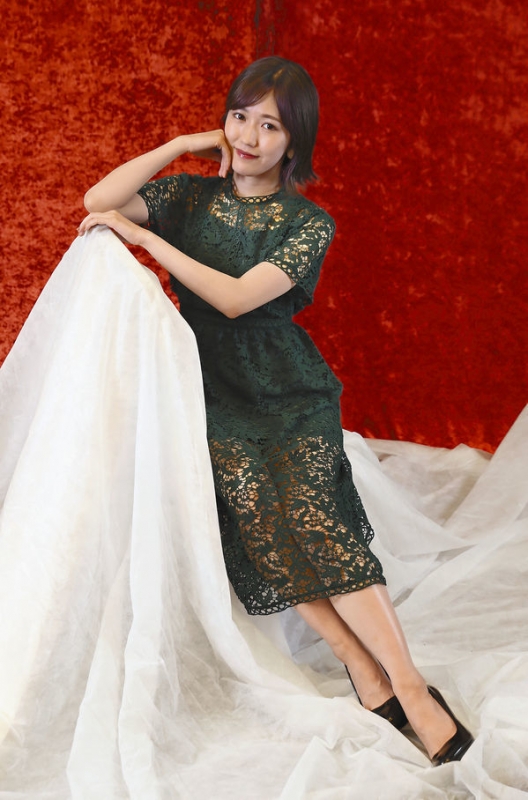 By Makoto Hoshino / Yomiuri Shimbun Staff Writer
Mayu Watanabe says she has “another side.”

Her admission was surprising. As a mainstream idol, Watanabe stoically pursued her profession and has a lovely face some say could only be made using computer graphics.

However, her comments reflect her character in the drama “Itsuka Kono Ame ga Yamu Hi made” (Until someday when this rain is over), which airs on Fuji TV at 11:40 p.m. on Saturdays. Watanabe, a former member of the pop idol group AKB48, plays Hikari, a woman who is ostracized for being the sister of a murderer and lives a quiet life.

“When I was around 15 or 16 years old, I decided not to feel things and remain indifferent so I could continue as a member of AKB48,” Watanabe said. “Had I not made that decision, I wouldn’t be here today. I think I’m like Hikari; we both are living against our real desires and personality.”

Hikari, a bar hostess, has worked hard to keep her dream of becoming a musical star alive since her brother was arrested for murder 15 years ago. After his release, however, he insists he’s innocent, and the world around Hikari starts to change.

Along with their similar personalities, Watanabe and Hikari also share a passion for musicals. Some of Hikari’s lines seem to represent Watanabe’s feelings, such as a scene in which she shouts, “I’ve lived without getting help from anybody. For 15 years, I did it all by myself!”

“That really resonated with me, since I also feel like I’ve worked through everything alone,” Watanabe said.

The singer-actress has also starred in “Tatakau! Shoten Girl” on Fuji TV, “Sayonara, Enari-kun” on TV Asahi and other serial TV dramas.

“Itsuka Kono Ame ga Yamu Hi made” is the first drama in which she has played the lead role since leaving AKB48 late last year. “I feel more pressure now because I’m no longer affiliated with a group,” she said. “But I like taking on the challenge. I’ve never played this kind of role before.”

Though her sense of professionalism hasn’t changed, Watanabe admits she’s changed in other ways.

“I used to feel like I lived in a secluded place, always moving around in cars. Now I’m just happy walking on the streets. It’s so refreshing. I’m now quickly experiencing things a normal 24-year-old would experience.”

Asked for her thoughts on her former colleagues’ activities after leaving AKB48, Watanabe replied: “Everyone is able to do what they want to do. That’s most important. It’s not about how you’re perceived.”

She likes musicals because they evoke various emotions, and has performed in a musical adaptation of the film “Amelie.”

“I had tears welling up in my eyes during the curtain call. It was a scene I’d always dreamed of. I felt so fulfilled,” she said.

The “real” Watanabe is worth keeping an eye on. She’s outgrown her image as Mayuyu the pop idol.Speech